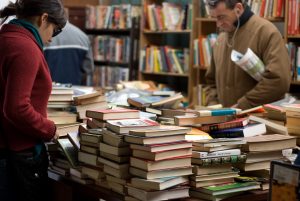 Ken hadn’t always enjoyed book signings. After his first one, he swore he would never do another one. It had been at A&B Books in a suburb of Pittsburgh. Before he had even made it to the store, he had finished off half a bottle of some pink stomach medicine to keep from vomiting. He remembered the bookstore owner, Boris Lysenko, an Eastern European immigrant, had met him with a warm smile and firm handshake.

“Mr. Simmons! It is pleasure to meet you! I am honored you choose our store for book signing!”

“Thank you for having me,” Ken had replied. “So you liked my book?”

“My wife, Anya, read your book and like it very much. Sadly, I do not get much chance to read anymore. Too busy running store.”

Ken smiled at him, grateful for having a place for the event that wasn’t going to charge him.

Boris led him to the folding card table he had set up in the back of the store. There were two big stacks of Ken’s book on the table, one on each side. Behind the table was a metal folding chair like you would find in a church banquet hall. Ken counted the books, ten in each stack. He wondered to himself if old Boris had any more copies in a stock room or something. Certainly twenty copies wouldn’t last long.

The first hour he sold two copies. One was to his mother and the other to his neighbor. He started to think that this writing thing might not have been a good career choice. He had a lot of time to think and in all that thinking, he decided that if nothing else, book signings weren’t very useful for selling a book.

During the second hour, a few more people came up to him. Unfortunately most thought he was an employee. One woman rushed up to him with her toddler in tow and asked him where the restroom was. Another asked where he could find the new Stephen King novel. By the third hour, he was feeling like a complete idiot, sitting alone at the table and forcing himself to smile at the people who walked by.

In all, he sold five copies in three hours. He signed the rest of the store’s copies, then left feeling dejected and sore from sitting in the stupid folding chair all afternoon. He spent the rest of the evening on the couch nursing his bruised ego with beer.

Ken’s luck changed a few months later when a nationally syndicated televangelist picked his book as an example of “what’s wrong with America today.” Glorifying a serial killer was evil; those who profited from such works of evil and those who read such vile filth were all doing Satan’s work and would burn in the fires of Hell as sure as the sun would rise in the morning.

Overnight K. Elliot Simmons had become a household name and sales of Roadside Stalker had gone through the roof. His publisher had insisted that he do book signings in every major city across the country. At first, Ken had refused, finally relenting when they had agreed to pay the travel expenses for both him and his wife. He figured that at least they would get a free vacation out of the deal. Those events had been nothing like the one at A&B Books. They had been held at major bookstores in large cities and promoted by interviews on TV and radio. People would line up outside of the bookstores hours before they opened, many bringing their own copies of his book so they wouldn’t be caught without one if the book sold out. Which it always did.