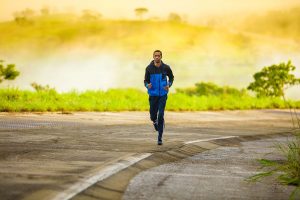 I went for a run yesterday morning. Just a short, one-mile run, but it was a beautiful morning and I couldn’t help myself. One of the things I enjoy about running is that it clears my head. I put in my earbuds, crank up the music, and run. At the start of a run, I focus on my breathing and my pace, the mechanics of the activity. After a couple of minutes, I’m settled in and zone out. Then my mind is free and my thoughts are flowing—at least until the end of the run when I’m tired and struggling to keep pace.

First, on the most basic level, running is easy, just like writing. You go out and run. You don’t need special equipment, or special skills, you just do it. Writing is the same way. You just do it. The more you do it, the better you get. You don’t need to be a professional athlete or have an MFA. While those may help (running and writing respectively), they aren’t requirements for entry. Okay, that’s not a very inspired observation, but you have to start somewhere.

Continuing with the basics, when I’m writing, like when I’m running, the first few minutes is about getting into the rhythm. Getting my body into running mode, getting my brain into writing mode. After the first few minutes, my thoughts are flowing, and words appear on the page. Word count is the writer’s version of the runner’s distance. Those who run for the enjoyment of it aren’t focused on their time, just their distance (beyond trying to keep a steady pace and maybe looking to best a personal record). Likewise, a writer isn’t worried about words per minute, just total word count.

Now we get into the cool stuff. Beginning writers, like beginning runners, are just concerned with the mechanics of the task. Pretty soon, however, the mechanics are working, and it’s time to step things up a notch. The runner starts learning about pacing, and training strategies, and race strategies. Nothing too complicated. Just simple things like how often to run and how fast to go during various parts of the run (don’t start off too fast or you’ll burn up your energy reserves and won’t have enough left in the tank for a solid finish, etc.). Or starting your story with a hook that will engage the reader. Then adding a good inciting event to get your characters off on their adventure at the right place: early enough that your readers don’t get bored, but late enough that they care about your characters when the tornado carries them off to Oz.

Learning story structure takes your writing to the next level, beyond the mechanics of writing and into completing stories. Likewise, learning running strategies takes your running to the next level, beyond the mechanics of running and into completing races. Short stories, 5K’s, Novellas, 10K’s, novels, half and full marathons, A Song of Fire and Ice, ultramarathons… You get the picture. It doesn’t take much training to run a 5K. Likewise, just about anybody can complete a short story. To do it well takes training/knowledge, but anybody can participate.

But running a marathon takes a lot of work to train for. Writing a novel takes a lot of knowledge. Sure you can write 80,000 words in one document and call it a novel, but to be something other people want to read takes a little more than that. Likewise, most people can travel 26.2 miles on foot, given enough time (possibly days), but to do it without stopping, and without dying, takes training. Although I don’t know of anyone who has died from not being properly prepared to write a novel. Yes, I know, you can learn how to write a novel while you’re writing it, but you end up doing a lot of rewrites, so in a way, you’re still doing the training before you write the marathon.

Of course, there’s a lot more to both, especially if you want to become a professional. You hire coaches and editors, maybe an agent to take some of your hard earned reward (theoretically so you can earn more than you would without them, but that’s a topic for another day).

But eventually, once you’ve put in the time and effort to train/learn, and you’ve spent the money on the equipment/software you need, and you’re mentally prepared to run that race, now what?