My next book will be a prequel novella to The Andor. It’s the story of Randell’s first days in the Garthset Militia. We learn more about him and why he hates the orcs so much.

Here’s a sneak peek at the drafts for the cover: 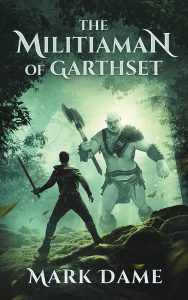 Let me know what you think!

In 2015, Mark started work on his debut novel, Dark Ties, due out early 2017.  The novel follows a writer who finds himself psychically linked to a serial killer a thousand miles away.

When not behind a desk, Mark enjoys cave diving, running, and camping.