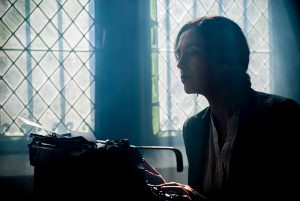 A lot of writers give their characters goofy names, especially in the Thriller genre. Mike Gunn, the trigger-happy, retired police detective turned private investigator. Jack Action, the stuntman who solves crime in his spare time. Amy Winchester, the ex-sniper trying to escape a past that won’t let her go. The romance genre is even worse for this. Chastity Lovelace, Hank Mann, Holly Day. You get the idea.

When I was working on Dark Ties, I was criticized in a writing group for the names of my characters. The names were so ordinary, so plain. Ken Simmons, Allen James, Charlie Reese. The comment was something like “names that look like not a lot of thought went into them make agents and readers think the author didn’t put a lot of thought into the rest of the book.”

Every time I read a book blurb where the author has come up with some godawful, pretentious, contrived name for the main character, I put the book right back on the shelf. Those names make me think the author is more concerned about fluffy bullshit than with telling a good story. How much time did he spend coming up with the name Rex Herdeman for the strapping ranch hand with a hidden past in Where the Cows Won’t Go? Does she really think I can take Finch Malchance seriously as the sweet and innocent, but unlucky, main character of Exile from Paris? Ugh.

I could go on. The point is, you don’t need to come up with some goofy name for your main character. Sure, if you can create some clever symbolism, awesome. Look at two of Stephen King’s characters. Carrie White: Carrie is just an innocent and pure young girl tormented at home and at school. White represents that unstained innocence (that becomes very stained as the story progresses). John Smith is just an ordinary guy, has no desire to be in the spotlight or to do great things. He just wants to be a good person. But the fate of the country falls into his lap and he has to struggle with doing something very wrong for the rightest of reasons.

Character names must be authentic for the story’s setting, so naming your medieval knight Mick Sledgehammer doesn’t work (unless you’re writing a comedy). Likewise, naming a struggling single mother who lives in the ghetto of Chicago Felicity Goodhart doesn’t work either. Don’t name your American character Pierre Girard and don’t name your roman centurion Foxamus Muldarus. I would rather read a book full of John and Jane Smiths than one with a main character named Jebulizus Targusta. Or Chastity Prudence.

Some authors take it to the next level and come up with names that I can’t even begin to pronounce: Heirwegala Fuatquie. Or maybe weird spellings of common names to make them unique: Qarole Myllar. WTF??? Get over yourself. There’s nothing wrong with Henry Fontaine or Carole Miller. The author may think he’s being clever or unique. You want to know what you’re doing? Taking me out of the story. When I spend more time thinking about how the author thinks Tzerrqidalops should be pronounced, I quickly lose interest in the story.

There are times when odd names are called for. In science fiction, go ahead and name the six-eyed, three armed alien Bozzkwit. Or name your elven king Ethereaan. They’re not normal English names and that’s to be expected. But they’re easy to pronounce and remember. Name your cast of dwarves Kelthak, Krickslo, Galazar, and Benny, But don’t name them Keezeaasa, Gaiehtbly, Bweogtzir, and Kaeiou. Make them pronounceable. Make them memorable. They don’t need to be unique, though I would stay away from naming the leader of my dwarves Thorin Walnutshield.

Sure there are some popular authors who use strange names in their books. I’m not saying that bizarro names don’t exist in bestsellers. I’m saying that they aren’t necessary. I find contrived names very distracting when I’m reading. There was once a time when names like Thomas Magnum and Mike Hammer were strong, interesting names, but that was a long time ago, before it was cliche.

These days, just stick with a good, ordinary name. One that won’t get your main character beat up in school.

PreviousMovies vs Television and How They Relate to BooksNextReports of the Death of the Ebook Are Greatly Exaggerated
This site uses cookies: Find out more.